An Internship at Warp Speed 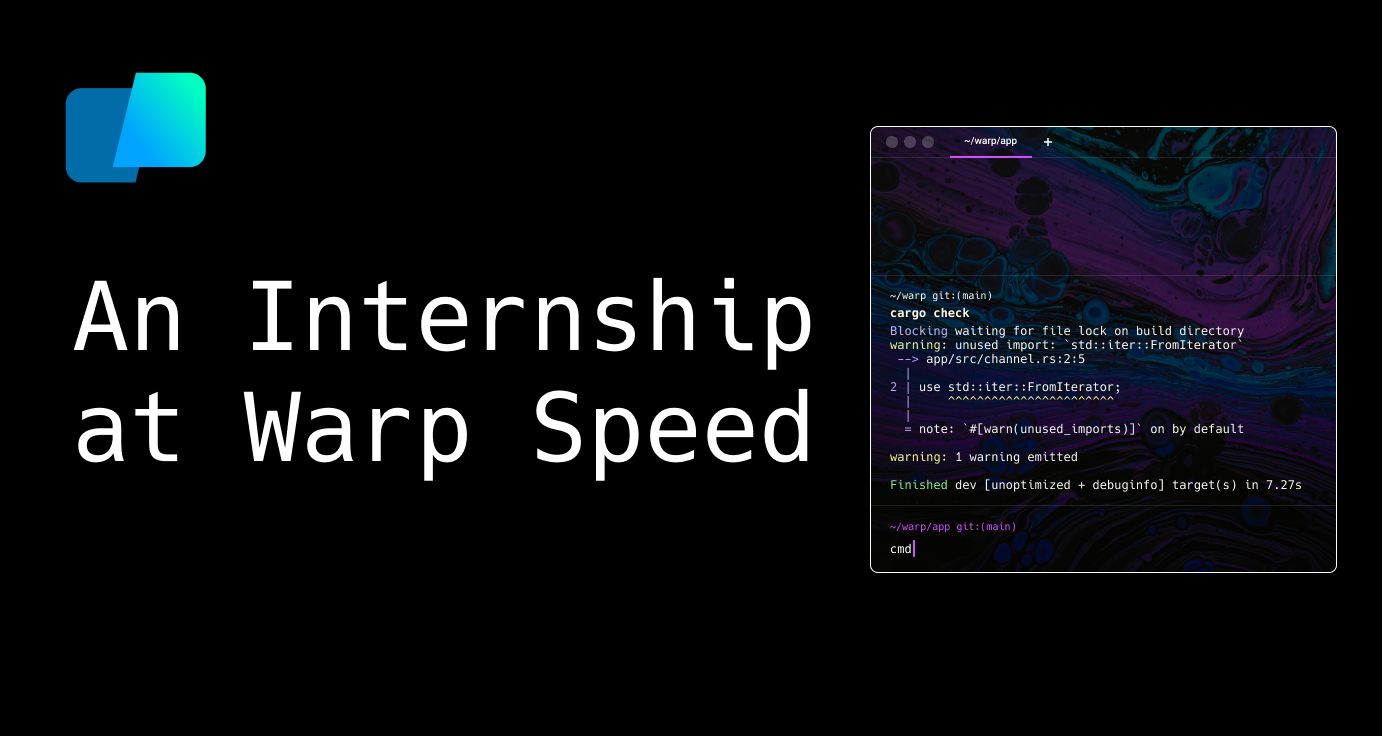 Varun is a rising senior at the University of Michigan. He’s interested in athletics, food, and anything that involves an adrenaline rush. He’s fascinated by how startups are built from the ground up.

Last fall, I had to make a big decision. I was taking spring semester off and I wanted to do something special with the 8 months I had before me. I wanted to ensure three things:

I joined Warp to accomplish goal 1, but I found that I made significant headway on goal 2 as well.

Why I Joined Warp

I found out about Warp through the Neo portfolio. They connected me with Zach Lloyd, Warp’s CEO & founder. I instantly realized that he’s a little different than most founders — he’s very forthright in his communication; no fluff; no bouncing around the point. I soon found out that he had written all of his learnings on a website called the ZBook. The team is similarly thoughtful and experienced so I knew I would have lots of people to learn from.

Secondly, when I first started coding, I was honestly scared of the terminal. I saw it as a deep, dark cave of despair and hidden information. A company trying to remedy that is a company I wanted to work for.

I saw it as a deep, dark cave of despair and hidden information.

And lastly, I found the business case quite interesting. Warp is creating a paradigm shift — no business has historically paid for a terminal because it has always been free. But, that’s also why it’s stayed largely the same for the past 20 years. Large businesses are only ever built with a corresponding large switch in behavior.

My Experience at Warp

‍‍I’ve had the chance to do a lot during my internship – here’s a list of some things I did outside of engineering and product:
‍

I had the complete authority to start any initiative, write to anyone in the company, propose any feature, and take down prod whenever I wanted. (luckily the last one never happened)

And when it comes to engineering and product I led the entire end-to-end process of a couple of features. The most technically interesting feature I launched was called Launch Configurations.
‍

This is a feature which lets a user save a configuration of windows, tabs, and panes so that they can easily open it later. See the docs here.

This feature was particularly interesting because of three main reasons:
‍

There were two main aspects to launch configurations:
‍

When developing this feature, there were a few main concerns that we had to consider for each of these flows:
‍

To address some of the above concerns, we decided to reuse the concept that Warp users are already familiar with – our command palette — and turn it into a more generic module. We wanted to use the palette mechanism for both viewing existing launch configs, and saving a new one.

Parallel to this project, another palette was being created: the session navigation palette. This feature would allow users to quickly find existing tabs and navigate to them seamlessly. The product process became complex because these two concepts were slightly related. A large decision that had to be made was whether the two palettes semantically belonged together (and be viewed as a single palette) or should be separated.

But as we jammed on the designs, we began to drift away from them being fully coupled. Our next iteration separated them into two palettes connected through a button.

It still didn't feel right. So, inspired by the Chrome search for tabs feature, we created our next iteration. This iteration combined the navigation and launch configuration palettes into a top-right corner palette.

However, we decided not to pursue this design further, and went back to the original palette style. We also decided to fully separate navigating sessions from launch configurations, and implement “prefix logic”, allowing users to switch palettes easily with a prefix typed into the command palette.

After all this, we still had to figure out one last complicating factor: how should the saving flow relate? Since we know that the palettes can switch easily, we quickly (and perhaps prematurely) decided to also incorporate a palette for this flow.
‍

However, even though this palette looks similar to the other palettes, its functionality is entirely different. It was confusing because what’s usually the search bar has turned into an input bar for naming a file.

So we eventually landed on a much simpler flow with a modal.

The command palette is a core part of Warp. It allows the user to execute any command from one location. The concept of a palette is powerful, and in the future there’s potential for many different palettes (similar to VSCode’s quick open feature). We wanted to enable this potential by creating a generalizable palette. My friend and fellow intern Abhishek Pandya led this charge.

This was an interesting task because in a typical OOP language, you would imagine making a base class from which these palettes could simply inherit. However, Rust doesn’t have the concept of inheritance. Rather, Rust has something called traits. These end up being quite similar to abstract classes. I was forced to use "composition over inheritance" by design of the Rust language!

“Rust doesn’t have the concept of inheritance, rather it has traits.”

At a high level, it looked something like this:

After all of the refactoring was finished, I began using the palette class to implement both the launching and the saving flows as shown here. Because the saving flow used the palette in a way that it wasn’t really designed for, I encountered all sorts of caveats, exceptions and problems with this implementation.

What I realized however, is that a good UX typically lends itself to simpler code. The palette was not the right decision for the saving flow and the code seemed to know it before I did.

In early August, I wrapped up the feature and launch configurations are now live for all users! Check out the docs for more information about what you can do and how to use this feature.

Gallery of Other Features I Built

@warpdotdev I was just talking with another dev friend about adding regex to ALL ctrl+f search functions and I see you added that feature today. Optimistically paranoid, you just saved us a ton of time 👍 it should be #everywhereByDefault ! pic.twitter.com/l0HodJjqge

🥳 You can open Warp from within VS Code!

Then you can use CMD + SHIFT + C to open up a new session of Warp. pic.twitter.com/00zL9uGNmn

Users are now able to reorder tabs with a simple keyboard shortcut. This was a highly requested feature.

Over my time at Warp, I’ve compiled a list of learnings. Three of them were particularly interesting.
‍

Over parallelization creates a risk of nothing getting shipped

I always thought that one should attempt to parallelize things as much as possible. Logically, if you can parallelize tasks between multiple people, projects will finish faster. However, I now understand there are quite a few exceptions:
‍

The more projects there are, the more management time you’ll need. Coordinating and keeping the right priorities aligned is a higher time cost than one might expect and it increases for each project you add to someone’s radar.

Additionally, if things are over parallelized, the feeling of progress diminishes because while as a whole you are going quickly, each project goes quite slowly.

There is still certainly a balance to be struck somewhere in between.
‍

I’ve always believed that the most attractive companies to join are the “grind-iest” companies, the ones where everyone works a lot because that means the company must be growing extremely quickly. This idea also proliferates in many of the environments I’m in (i.e. college).

However, I’ve realized that very experienced engineers are not as attracted to this idea. They have gotten to a point where the hours they spend engineering are extremely efficient, so their 8 hours would equal someone else’s 24. And to stay at this efficiency level, work-life balance is important.

Logically, it makes more sense for a company to have more experienced engineers than junior engineers, especially in the early stages of a company. You can move quicker and with more direction, and when younger engineers join, you are primed to give them incredible mentorship.

I’ve found that work at Warp is extremely focused and efficient, but there’s a strong work-life balance. The experience of the team reflects this.
‍

At any point in time, everyone should know where the single source of truth of your project is

This became particularly apparent when I left for a week and a half during the middle of my internship. Before leaving I posted a massive message in Slack about what needed to be done, what priorities were, and what the state of my project was so people could continue where I left off. However, that’s not ideal. It should always be clear to everyone involved where the outstanding tasks are enumerated and what the state is.

I had things tracked in Linear, through my PRs on Github, in Slack, and also in a Google Doc. The bus factor became low because only I knew what was updated and what was not. Once tasks are centralized, handing projects off becomes simple.
‍

I’ve been really enjoying building for developers. It’s unlike anything I’ve done before. It’s as if we have a full external product team. If you look through the github issues page, you’ll find Figma mockups created by users, nearly full PRDs described in issues, and sometimes our users will even build for us. Developers also tend to have a good idea of how difficult a feature is to build, so expectations are usually quite aligned with ours.

“Building for developers feels like we have a full external product team.”

I’ll be going back to school for a semester. But, I know that I want to continue building for developers.

Here’s a small photo gallery of my experience.